Over the course of a two-decade-plus career working in the horticultural industry, the question of how to work with plants and landscapes in a sustainable way eventually led me to quite a few Indigenous thinkers and teachers.

This, in turn, led me to asking the question of what I had that I could give back. It is a question that has rolled around in my head for quite a long time. While the first reaction is to ask what I can offer directly to Indigenous communities, I’ve slowly begun to recognize that the Indigenous communities aren’t really where my help is needed. They are more than capable of creating their cultural resurgence without one more white lady in the mix.

A bout of media coverage around one more piece of proof of the brutal reality of Colonial harms inflicted on the Original Peoples of this land has created a new flurry of ‘What can I do?’ as we experience the discomfort of the unraveling of the social narrative that many of us were raised to. The question is often a reaction to that discomfort, the seeking of a way to process it so it stops being so uncomfortable.

I would suggest, as many Indigenous people have suggested, that the best thing to do with that discomfort is not to run from it. Instead, we need to sit in it. To let it change us.

And change, deep, visceral, foundational, cultural change is what is really needed.

I’ve been working through an idea lately. One that is uncomfortable, as someone who descends from settlers and who has spent a lifetime as a gardener and a professional in horticulture, but is also important in my journey to find my role and understand my responsibilities within my ecosystem.

Horticulture, as it is practiced in most gardens and landscapes within what is currently Canada, is a physical practice of colonization.

So how do things go so wrong?
The foundation of contemporary landscaping practices can be traced back all the way to the rise of agriculture. Agriculture in the form of tilling land and growing annual species over large areas. Altering the land in a way that ensured an abundance of resources in the short term, but that relied on steady expansion into new places, as the land that was altered lost vitality.
This expansion eventually became what we now know as colonization.
It replaced adaptability and local knowledge and relationships with land and ecosystems with standardized practices, with predictable outcomes, in simplified ecosystems. Many now simplified to the point of monoculture where there were once thousands of species.
Among the core costs we have all paid for this are the losses of relationship, resilience and complexity and of the vitality of the ecosystems that once built up soil and watersheds through the interactions of all of the species that existed within those ecosystems, including the actions of the human species.

Can just changing how we garden actually fix this?
No, not on its own, by but shifting away from a practice of imposed order and stasis, of simplified predictability, in our relationship with the land and ecosystems we live within, I believe that we can begin to re-weave the patterns of thriving, diverse complexity, of celebrating the gifts that life offers when it is free to exist in and of its own right. This can give us a foundation of practice for expanding those patterns into how we exist within the world. We can physically engage in the practice of dismantling of the original driver of colonization. Inviting in and celebrating messy, unordered complexity, and learning to recognize the strength, vitality and resilience of the relationships and interactions that result, can help erode the culturally enforced supremacy of ordered monoculture that is both violent and fragile.
Gardens cared for, rather than dominated, are incredibly beautiful. It is a different kind of beauty. A beauty of health and complexity, of growth, progression, vitality and abundance.

The role of the gardener is this is one of slowing down, observing and celebrating.
When we are beginning our relationship in a place where the complexity and vitality has been damaged by past actions, our role is also one of bringing the species that will form the foundation of the ecosystem back to the land. Of rematriating the plants that feed the web of life, from the soil to the butterflies to the humans. To observe how water moves and where it is needed. To observe and care for young ecosystems that are finding their balance, while also being patient enough to accept that they will stumble and struggle at times, but to be caring enough to nurture them when needed. To take the role of facilitator and cheerleader rather than one of domination.
This is an active, physical process of re-learning how to be in relationship, to dance with the garden, rather than insisting that it march to our imposed rhythm. Re-learning how to be in relationship with all the glorious, messy diversity of life is something that I believe, from the top of my introvert head to the soles of my gardener’s feet, is absolutely necessary.

While these words are all mine, the thoughts have been seeded and nurtured by a diversity of voices. Among many others, these include:

I’ve been seeing a lot of posts on Facebook about not tidying the garden until the temperature consistently reaches 10c.

While I agree with the intent, like most things, we can dig a bit deeper into the issue.

So, what does all of this mean when it comes to spring cleanup? 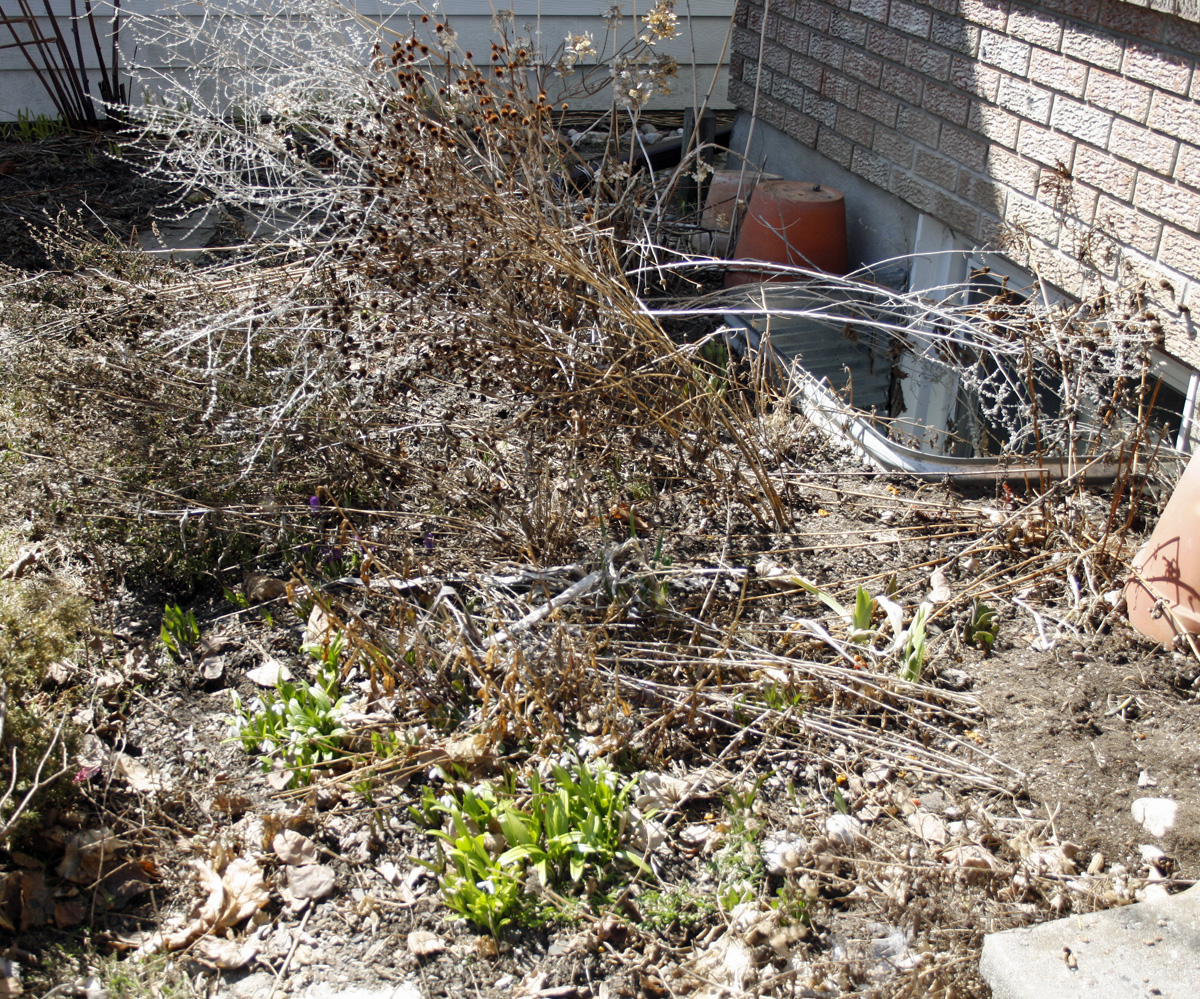 Wait until the soil starts to dry out. If you are leaving footprints, leave it alone, it takes a long time to soil to recover from compaction.

Pick up all of the garbage that has blown into the yard over the winter and any of the ‘gifts’ left by neighbourhood cats and dogs.

Remove matted leaves from any of the tiny plants that will suffer from the cover. My curly onion for example, would get quite stressed if I didn’t pull the mat of maple leaves off of it.

Manually (no power tools like lawnmowers or leaf shredders, they chop up the plant material and the critters) cut up the stems that are still standing and drop them to the ground as mulch. I generally use secateurs and chop the stems into 6 to 8” long sections. They will soon disappear under the new foliage and they will provide a great habitat layer for lots of critters, while also protecting and feeding the soil life.

And that’s it. No leaf blowers, shredders or other highly disruptive activities. No organic matter removed from the ecosystem. Lots of habitat space among the chopped stems. Plants that are all set for the next growing season. 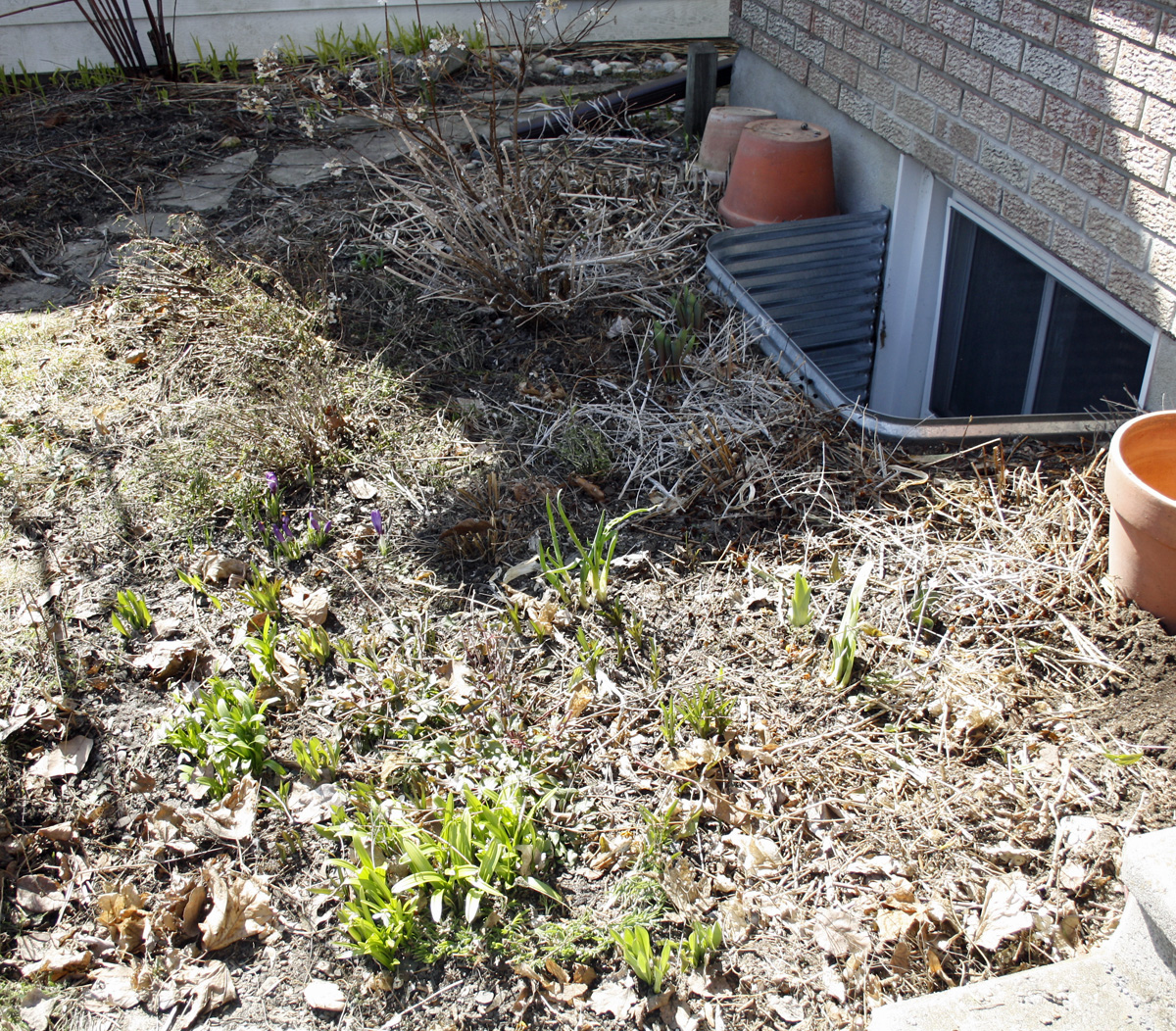